Before you start running wiring of any type.  Or cutting holes in your vehicle, sealing up walls, etc.  Or starting any type of anticipated power system.  You need to consider all options hard. 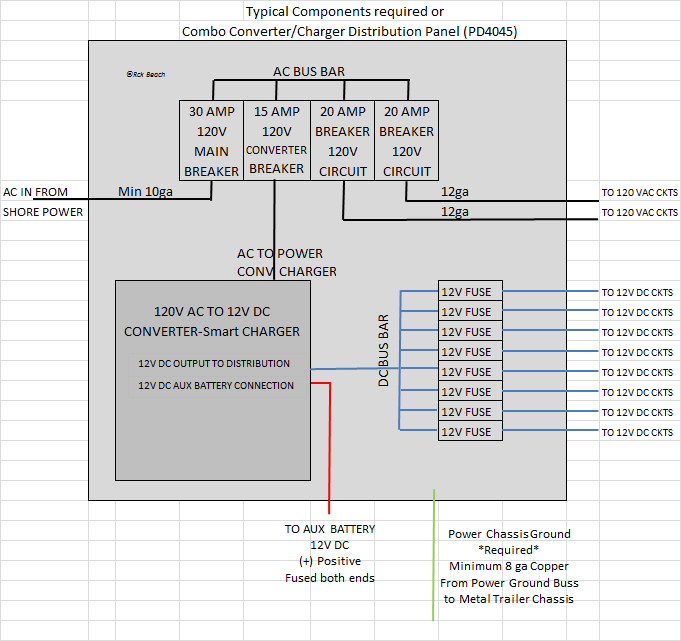 First, Converter part does just that.  It “converts” 120VAC to 12VDC.  Then passes the 12VDC onto a fused 12VDC Distribution.  This fused distribution is where you would terminate all your builds “House” 12VDC circuits.  Things like 12V lights, 12V water Pumps, 12V Charging ports, 12V fans, and appliances that require 12V power for igniters, or 12V Blowers.

Secondly, the Converter passes voltage to the Smart Charger, that is in turn wired to your auxiliary “House Battery”, or “House Battery Bank”.  The Charger recharges any consumed stored battery power.

Once the batteries are fully charged the Smart Charger goes into a “Float Mode” to properly maintain the batteries without overcharging them.  This is all  done thru wiring that is permanently attached.   This is just a simplified explanation of the very technical side of charging batteries.

You don’t have to fiddle around attaching alligator clamps from a battery charger, or flipping any toggle switches to turn things on, off, or put something in bypass.

So don’t think you won’t want or need a 120VAC to 12VDC Converter-Charger unit.

The unit also provides many system components, some of which will be mandatory or necessary anyway.  Components such as a Main AC Breaker, Branch Breakers, fused DC Distribution, and a Smart Charger.

We reference a Progressive Dynamics PD4045 often in many of our webpages.  In reality, there are more than just one brand, and numerous models under any brand.   Another popular RV brand is WFCO.  Both brands, in several popular models, are readily available at retail places like Camping World and specialty businesses that cater to RV and Trailer parts.  Definitely available on-line from numerous sources.

Options for selection of a model, depends on the type of charging output the unit produces, and whether that output is for “Flooded”, “AGM”, or “Lithium” type batteries.   Some are becoming auto-sensing or auto-adaptable.  The unit must match up to your battery type.  For the most part you can’t mix battery types and charger types that are not the same, and compatible.   There is some technical information you will need to know, or have someone knowledgeable walk you through.

Some Converter Chargers may even include integrated Inverter capabilities.  We aren’t going to touch on those.

Any of these various units are the heart of a safe and well wired electrical system.

A Converter-Charger unit will provide various minimum requirements.  Basic requirements you might otherwise have to cobble together, out of multiple other electrical components.  In cobbling together a system, you may inadvertently omit something important, not knowing better.

In the long run, the correct Converter-Charger will most likely save you money over installing multiple stand alone components, provide required safety features, and in the end create a much more organized and compact electrical installation.   Best of all you won’t be tearing up your build after the fact to add something in.

Most techs that work on any kind of electrical system, will tell you a neat and tidy installation, will be the installation that does not have faults and failures.  Or the type of installation that requires constant troubleshooting.  If your installation looks like a mess, it most likely is exactly that electrically.  A recipe for an unsafe build.

All vehicle or trailer conversions that are going to eventually attach to a 120VAC source.  Such as park power, your home via an outside 120VAC power outlet and extension cord, or a generator producing 120VAC.  Should in all cases have at least a Main 120VAC Circuit breaker at the “Minimum Point of Entry” inside the vehicle.

Minimum Point of Entry commonly refers to somewhere within 3 foot or less, concerning the main entrance Power wire.  At that 3 ft or less of entrance power wire, there should be at least a main 120VAC shut off/circuit breaker (We are talking about 30 amp 120VAC Service).  As well as the power ground being attached to the vehicles metal frame and skin. This chassis ground is for your safety as well as those around you.   For fire prevention safety as well as electrocution prevention safety.

The problem with a vehicle, and the electrocution hazard it presents, is due to the rubber tires.  The tires insulate the metal vehicle from having any electrical path to the actual ground you walk around on.  Once you bring AC power on board the vehicle.  The potential of electrocution is now present.  Should the AC Wiring be wired wrong, or end up with a fault due to vibration, damage, or what have you.  The entire chassis of the vehicle can become electrified.  You would be totally unaware.

A fault within the vehicle may not trip any breaker.  Especially if there is no “path to ground”.  The metal of your vehicle could become electrified.   Someone walking up on the ground outside, and touching the metal of the vehicle.  Their body could provide the electrical conductor between the electrified vehicle and electrical ground potential,……of the ground they are standing on.   Current would flow through their body.  Many conditions like wet ground verses dry ground could make this current flow be anything from a minor shock, to causing death.

There is a section in the NEC (National Electrical Code – USA) that pertains to Recreational Vehicles.  Which explains the requirement of a #8 copper power ground that must be attached to the vehicles metal chassis/skin.   This is an electrical item you don’t want to ignore or omit.

Also a side note.  A defective umbilical having to do with the ground wire, or a defective Park Power receptacle causing no ground.  Has the potential of also electrifying your vehicle if you have a fault in the vehicle.  It is always wise to verify/test your power anytime you connect up to any 120VAC.  There are testers and wazoo devices sold to the RV market just for this purpose.

Some of these devices are plugged in series with the power umbilical cable.  They have the ability to shut off and not pass power on to your vehicle if there is a fault.  So with that in mind.  You have to realize this stuff happens often enough, or they wouldn’t be selling these devices.

Most RV trailers, with one Air Conditioner, commonly operates on the assumption of using at least 30amp service. Via a minimum #10 Three conductor umbilical power cord.

The Power ground should also be grounded to the metal vehicle frame and metal skin.  That, as mentioned before should be at the minimal point of entry.

We are only covering the more common 30amp configurations.

What does a Converter-Charger provide?
(Reference the Progressive Dynamics PD4045)

Our recommendation is the Progressive Dynamics PD-4045.

There are other configurations that Progressive Dynamics builds in other amp values. There is also another widely used manufacturer, WFCO.  WFCO also builds various units. Both of these manufacturers units are found in the majority of all commercially built RV units.

We like installing parts and components that are easily found both 0n-line, and off the shelf in RV Parts/Suppliers, or even common hardware stores. You never know when you may have to do a replacement during an “on the road” failure. The PD-4045 is widely available on Amazon, at RV dealers, and in stores like Camping World.