For a refrigerator we were very limited on this Sprinter build-out.  Due to space available.  Plus the fact we wanted a high efficiency unit that was 12VDC powered.  This is installed in a 2019 Sprinter 144. 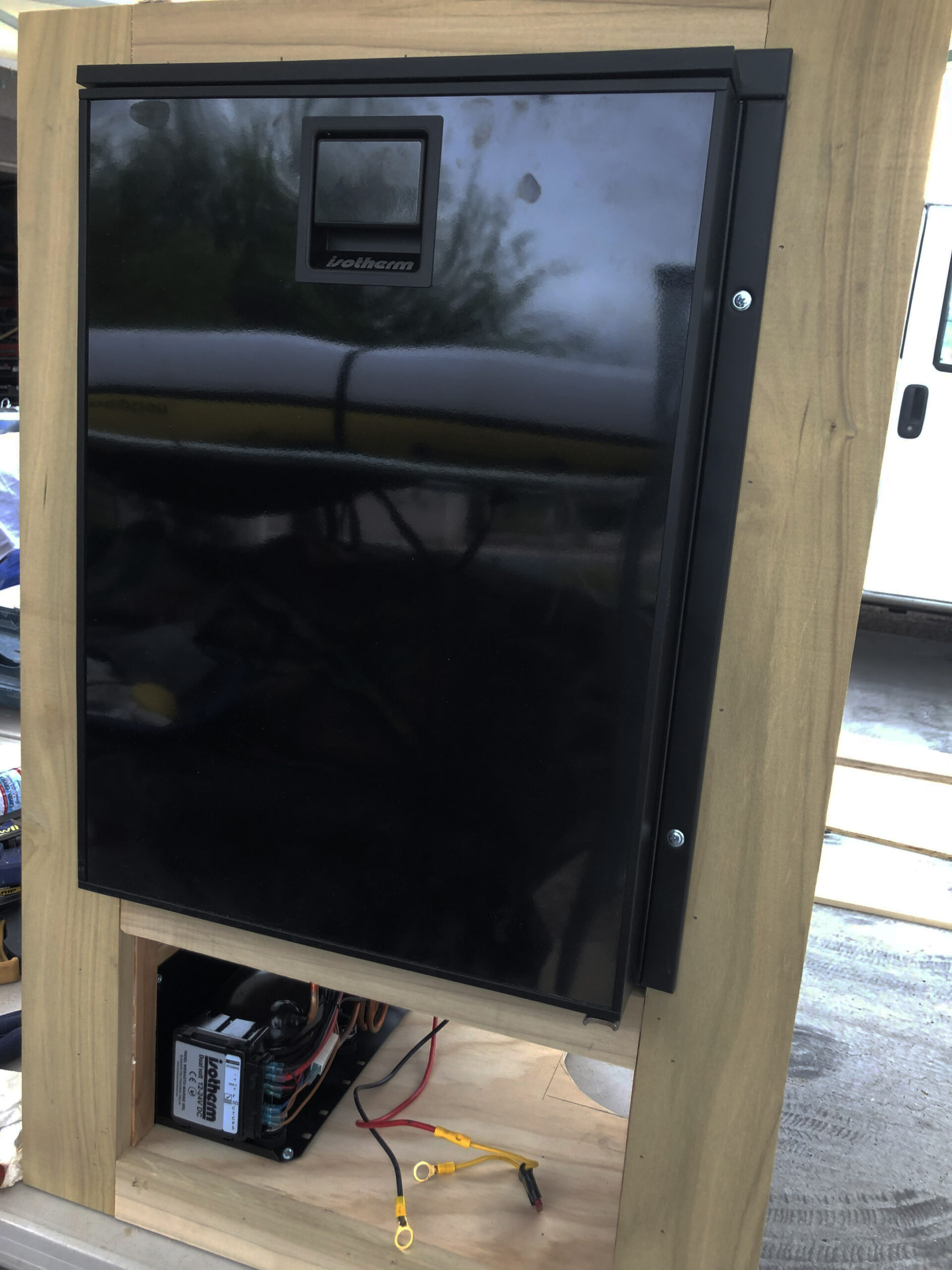 On a previous build we used a large capacity ARB brand.  While it met the power needs,  ARB unfortunately only has a chest type.  In this Sprinter build-out, a front opening door door, like a traditional fridge, was desired.

ARB use a Danfoss Compressor.  In our experience of nearly 9 years with ARB.  We know that unit costs us about 1 Ah off our batteries when we factor in the run time, and the off time, over a 1 hour period.  We often camp in the desert heat of  Las Vegas, Nevada.  The ARB can maintain 0°F with no trouble.  With a minimal draw off our batteries.

If you run off batteries for extended periods without recharging, low amp draws are a must.  I wouldn’t even consider anything over a 3 Ah @12VDC rating, while running. You are hoping for about half of that once run time, and off time, is averaged.

My last two fridge units were rated at around 2 Ah when running.  Both pretty much adhere to that monitoring meters we attached.  We have proved it to ourselves.  By monitoring with some more advanced meters that show active amp draw.  Also with the data collected that showed the “percent of battery charge”, over long periods of use,  These Danfoss compressor fridge units average spec estimates, and their actual amps consumed, is real close to 1Ah.

Many manufacturers specs are on lesser units.  That operate on both 120VAC and 12VDC.  Using a 120VAC to 12VDDC adapter/transformer when used on 120VAC normal household power.  So they give their rating at 120VAC.  I think it is purposely done to mislead the unsuspecting.  Once you connect it directly to your 12V battery source, or try to run it via a 12VDC to 120VAC Inverter, the amp rating given at 120VAC has to be multiplied by roughly 10 to give the true and actual Ah rating at 12VDC.  They fail to omit that number.

Or they give specs that average of run time, with equal amounts of stop time.  To give an overall average Ah rating on 12VDC.   Which is a totally bogus number if actual run time is nearly constant to provide adequate cooling.  This makes it an unfair number to compare to a manufacturer such as ARB or Isotherm that is providing actual 12VDC Ah ratings when running….and running directly off 12VDC.  Not an average of running, and not running, to maintain a temperature.

Believe us when we say all 12VDC refrigerators are not created equal when it comes to battery consumption.  Those touting cheap DC “Cooler” types as equal don’t know what they are talking about.  Or the cheaper fridge/freezers that consume 5,6,7…..or more Ah off your batteries when running.  We have researched many and have found many do not compare at this time of writing (2021).  But know that you are not going to find a high efficiency low amp draw unit for two or three hundred dollars either.

Those other units have there place and some people are satisfied with them when the unit is sitting in an air conditioned vehicle, and the vehicle is running and charging all the time.  Or they have over built their battery storage capacity to accommodate power hogs.

If you are looking for truly efficient fridge/freezers that have the lowest Ah draws off 12VDC., look at the following 4 brands, listed directly below.

Compare the 12VDC Ah rating.  Do not mix in the 120VAC Ah rating when comparing,   Don’t be tricked by average run Ah when doing comparisons.  Look at the running amp draw.  If it is high efficiency, the unit will run about 50% of the time.  So you can safely divide the run time amp draw by 2.   Yes you might have to do some digging to come up with the factual amp draw to compare brand/model to brand/model.
ARB
Isotherm
Engle
Whynter

Knowing that ARB uses a Danfoss Compressor the search was on.  That, plus it had to fit in a space with maximum dimensions of 33 inches (H), 23 inches (W), and 15.5 (D).  This included any cabinet materials to create a platform and box in the sides.  There are also adequate air flow dimensions to factor in.

The counter height was elevated slightly to maximize this opening.  We started searching boat builders and forums, thinking they would be using more compact units.  We also was trying to maximize our space by installing this fridge where the van’s wheel well would eat up some space.

Long story short, the Fridge selected  was not only for size and efficiency.  But also it had to be one that had the ability to remote mount the compressor.  In almost all cases, the compressor is on the back of units, and permanently mounted.  Creating a depth dimension that would not work for us,

We found a unique unit we highly recommend for van builds or cramped spaces.  This is a 12VDC powered unit that draws a maximum of 2 Ah on 12VDC when running.  When you factor in the run, and not run, time.  The overall battery draw is almost identical to the ARB. (1 Ah draw realized)  It does have a Danfoss Compressor, and the low amp draw we wanted.

On top of the “must have’s” in electrical specifications.  It also met our dimensional needs  20.8″ Height x 15″ Width x 13.6″ Depth (with compressor remotely mounted so we could accommodate the wheel well loss).

We drove from Las Vegas, Nevada to Los Angeles, California to pick this unit up.  Our local store was out of them and there was a backlog during Covid. 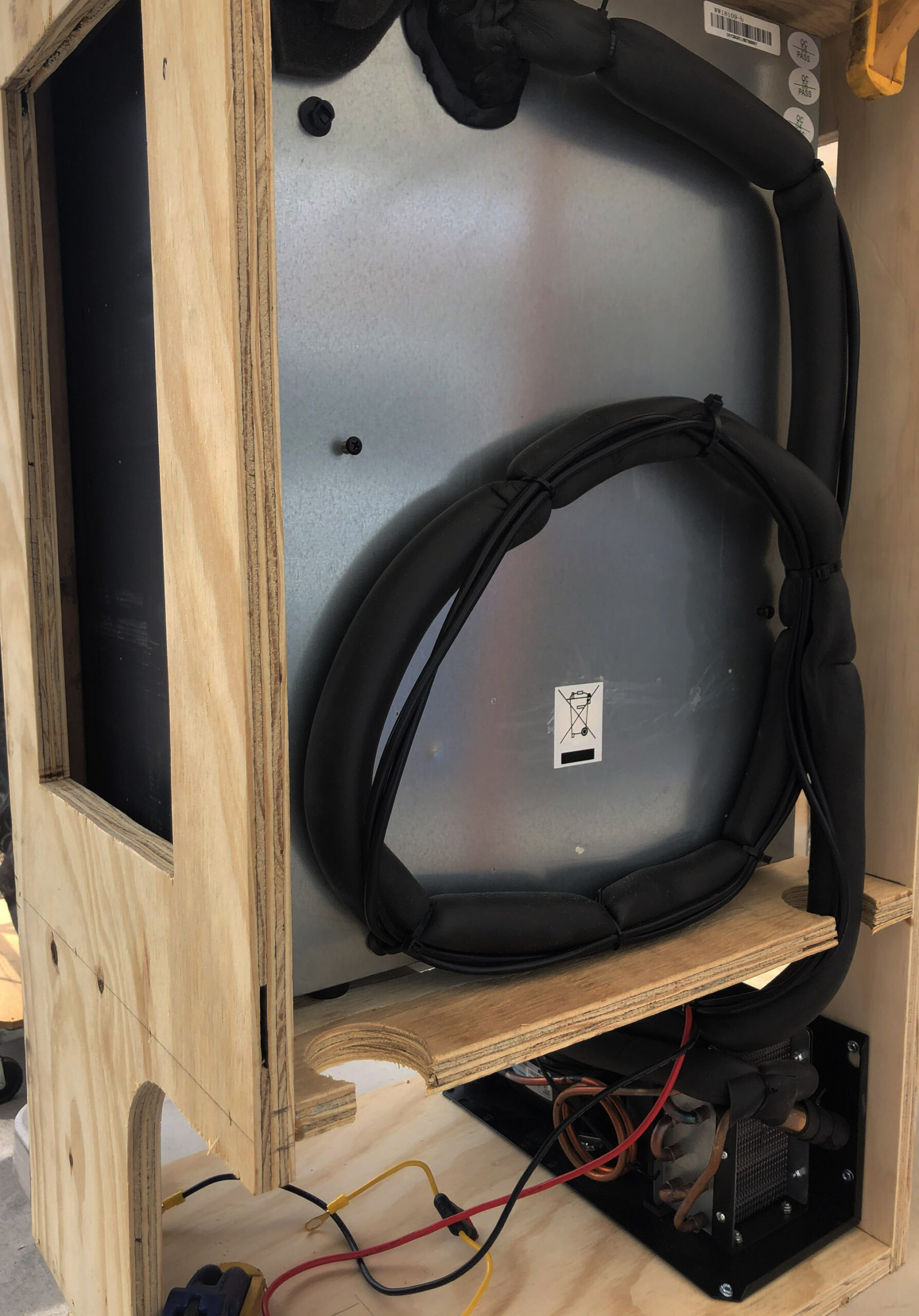 We mounted the compressor beneath the fridge.  We have had this unit in and operational for several months.  It works off our two auxiliary AGM Deep Cycle batteries just fine.  So far without any solar charging, and just charging off a 30 amp B2B Charger (B2B = Battery to Battery), when the vehicle is running.