Waste Water systems are typically separated.  A “Black Water” system, and a “Gray Water” system.  There is an individual holding tank for each. 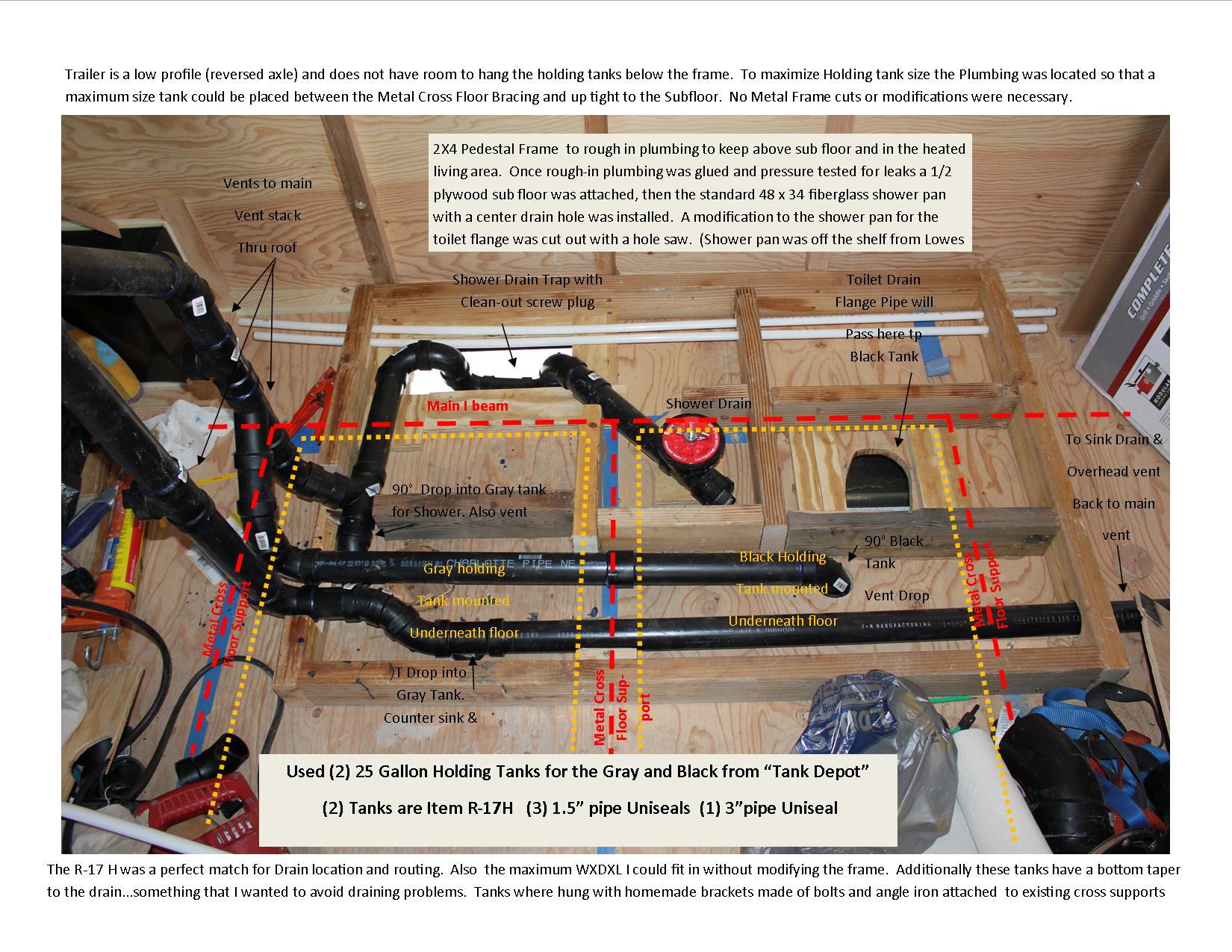 For fixtures to drain properly, drain pipes as well as vent pipes need to be installed.

Both types of tanks [Black & Gray] can be vented into a common vertical pipe that protrudes out through the roof, and capped with a special cap that allows the tanks to vent any smells, and exhaust/equalize any pressure created by draining fluids.

Drain drop pipes, that run into the holding tanks should be as minimum as necessary.  Drains  and venting of what ever side of the system they are on can share a common drop via “T’s” into their respective tank.   The Commode drop should not share with anything.

Vents of both Black and Gray can be joined together once above the horizontal runs of the drain pipes.  Hint:  Lay out so the drops are as close to the tank discharge as possible.  During tank installation you may have to insert your arm into the tank to assist guiding pipes through uni-seals.

Drain flange and drop for the toilet could be 3 to 4 inch in diameter.  Check the requirements on the RV Commode you purchase.  Make this a straight drop with no elbows.

The typical toilet in an RV situation does not have a trap.  The toilet pipe drops directly and vertically into the holding tank below.  To prevent tanks gases from coming up through the toilet, the commode is designed with a foot activated “Flapper” Valve.  These RV Commodes are not your typical flush type toilet found in your home.

Drain runs for the gray water need to be a minimum of 1 1/2 diameter pipe.

All vents can be combined in the vertical stack to go out through the roof, a minimum of 1 1/2 inch diameter.

Shortly after any drain fixture [Sink or Shower drain] on the gray system, there must be a “Trap”, and on the tank side of that trap a vent.  Codes vary but normally a vent pipe has to be within 36, perhaps 42 inches at a max, of any trap.

These are often purchased as a P-Trap, or made up with glued ABS elbows.   The shower drain is typically a glued up trap.  But it is advisable to make the shower trap accessible from underneath the trailer.  Also use an elbow with a removable clean-out plug.

The sink is normally a slip type P-Trap.  Though some may prefer the sink trap to be glued as well to avoid problems due to vehicle vibration.  Others want the slip type for ease of maintenance and installation.

The drops in the holding tanks are most easily installed purchasing rubber uni-seals.  Then drilling the appropriate sized hole in the top of the tank.  Popping the uni-seal in place.  Then slipping the drop pipe through the uni-seal, leaving several inches protruding in the tank.  You don’t want to make these too short where flexing or bouncing will cause the pipe to jump out of the tank seal.  Drain/Vent Drops should never be routed into the side of the tank.

Securing your tanks is an important task.  There should be no up and down movement.  Or side to side, end to end.  Use adequate heavy duty support.  Depending on tank size, these tanks when full, can weigh in the range of 200 lbs or more.

Holding Tank discharge pipes, one Gray, one Black are routed from the factory discharge opening on the tanks.  Routed to a Dual Gate Valve discharging T.  Commonly called “Dump Valves”.   Install and plumb your discharge/dump valves out the Drivers side of your trailer.  This is for campsite sewer hook-ups, and proper traffic flow at public dump stations.

Below Images:  Finished 34X48 Shower/Toilet combo.  With sliding plexiglass shower doors, and a hinged privacy door.  Walls are FRP bonded to 1/8 Luan panels that were pre-attached to furring strips.  Trimmed with 3/4×3/4 angle aluminum.

The ceiling vent was located in the shower for multiple purposes.  Exhausting smells, isolating the fan noise out of the rest of the living area, natural light, added head room, and in case the vent is left open and it rains while away from the trailer (rain will go down the shower drain.  Not on the floor or things like bedding). 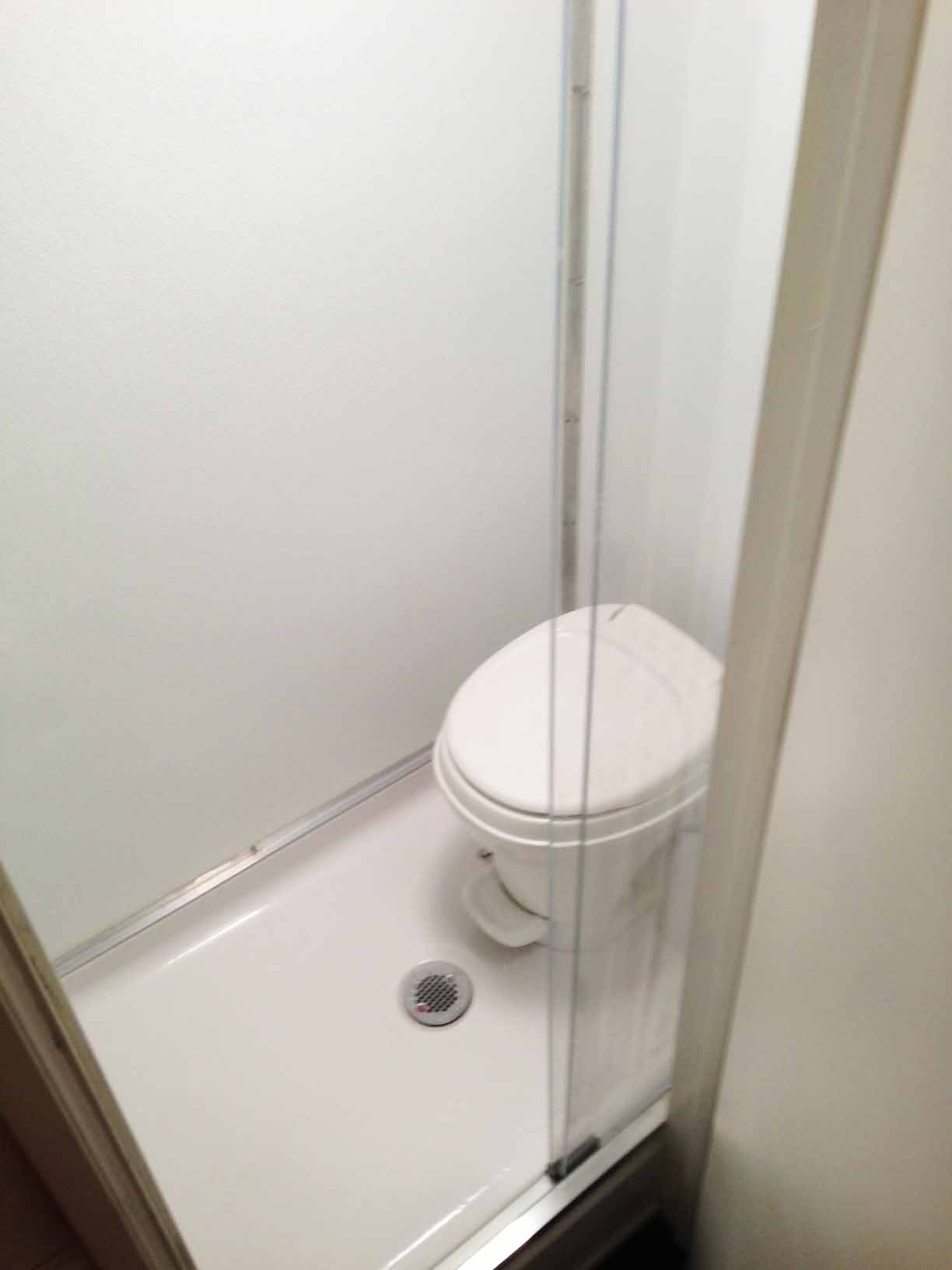 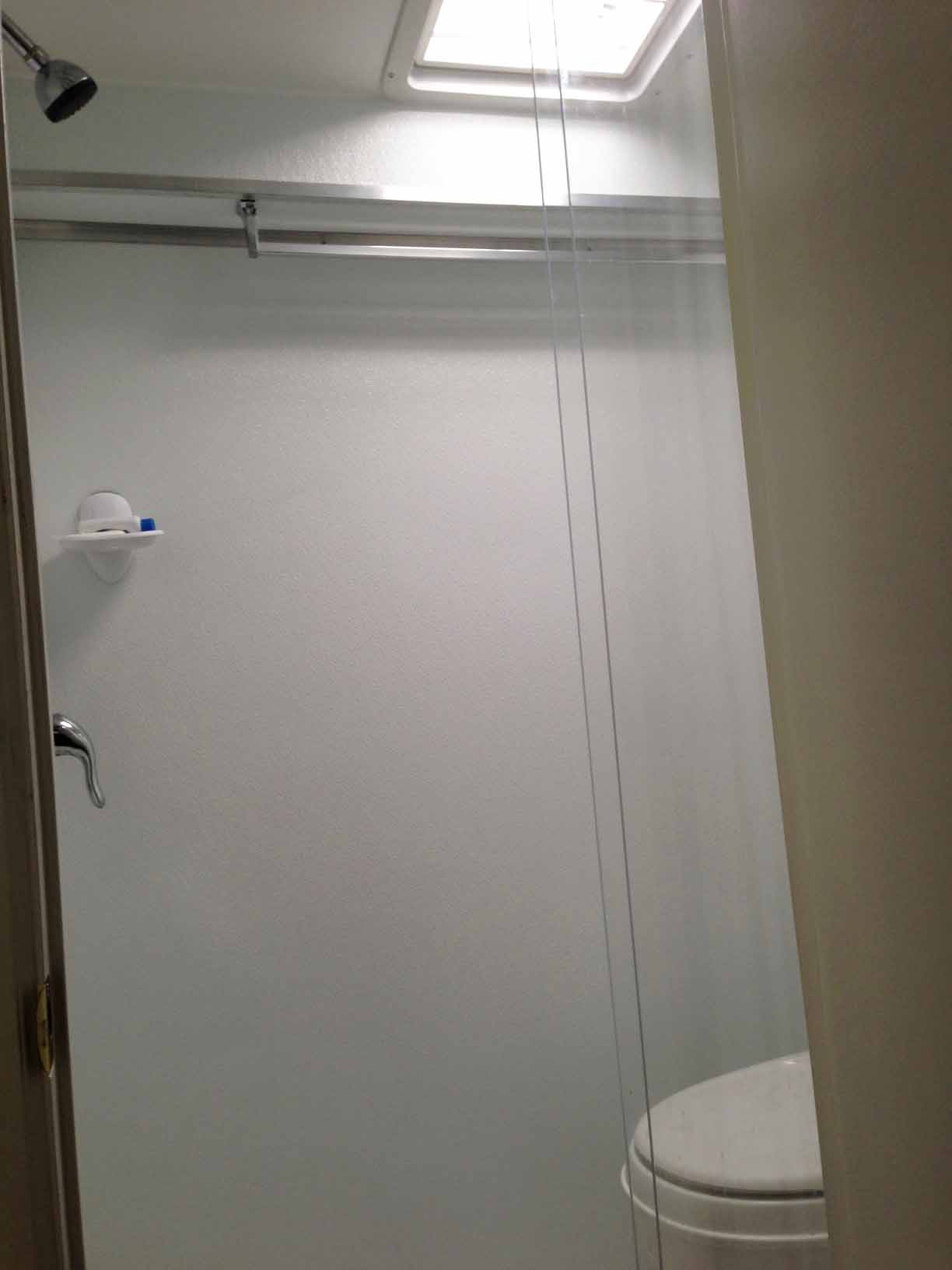